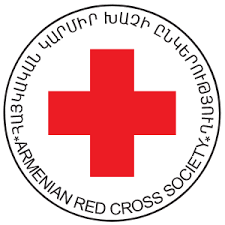 The Armenian Red Cross Society (ARCS) is a non-profit organization, established based on common interests of its’ members, the only National Society on the territory of the Republic of Armenia, which does not pursue any religious, political goals, not affiliated with any political stream, and carries out its activities throughout the country. As an authorized member of the International Red Cross Movement, Armenian Red Cross Society is guided by the fundamental principles of the Red Cross, and is an auxiliary organization to the government. Armenian Red Cross Society's mission is to reduce the vulnerability of the population through mobilization of the power of humanity, to get prepared to cope with situations, which may cause vulnerability among the population, as well as by assisting people made vulnerable by harsh socio-economic conditions.